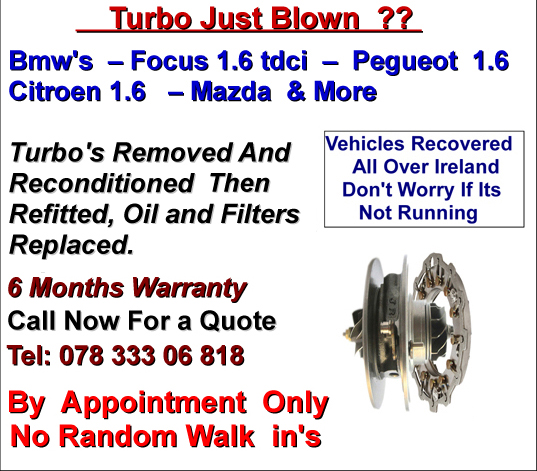 Most Bmw owners have an understanding that at some point they will need a reconditioned turbo for there Bmw, even though Bmw seems to be the vehicle of choice for most people they seem to accept that at some point there Bmw will start poring out white smoke and whistle as it accelerates, yes the turbo has gone in your Bmw. At Hagans Autos we Specialize in Bmw turbo reconditioning and turbo repairs and through our 15 years experience in Bmw turbo reconditioning and turbo repairs we have found that if you get to the cause of the Bmw turbo failure then the problem rarely comes back, lest look at a few examples.

The main cause of turbo failure or a blown turbo is poor oil flow to the turbo and if this problem is not recertified then the turbo will fail again. There are several contributing factors that cause the poor oil flow, one begin, not regular oil changing and poor servicing although Bmw models use long life oil but when you combine this with dpf dilution you can seriously reduce the oils lubrication quality.

Another contributing factor which can cause Bmw turbo failure is the the dpf system, this is an exhaust gas treatment system designed to reduce soot practicals in the exhaust gas. The system dose this by a self regeneration proses but unfortunately this has a negative effect on the lubrication to the turbo.

There is one other contributing factor which is responsible for turbo failure in the Bmw 520, Bmw 530, Bmw X3, Bmw X5 ,Bmw X6 and more, the item in question is the crankcase breather. This item is commonly mistaken for some form of turbo filter but what it actually dose is allow the engine to breath correctly. If the breather filter gets blocked in any way then the turbo becomes the crankcase breather and all of the crankcase gases are now venting through the turbo but the turbo can't handel that amount of pressure so it simply blows apart.

At Hagans Autos we can remove the turbo from you Bmw and completely recondition and refit it, we then go to route of the turbo failure by replacing any oil feed pips, crankcase breather filters oil filters and engine oil, once its back together you Bmw is then road tested before returned to you.

Google Reviews
My Mazda 6 Diesel had an intermittent turbo boost problem, so having found Hagans Autos via a Google search I arranged for Colin to have a look at it. He diagnosed the problem very quickly and thankfully the repair was really simple. Thanks Colin!


My Bmw 320d M sport developed a turbo problem a few weeks ago, I went onto Google and searched for Bmw turbo repairs and found Hagan's Autos who specialize in turbo repairs and dpf removals. I left my car with Colin and he sorted it in just a few days, car is going great now thanks to Hagan's Autos.
See More Reviews Here